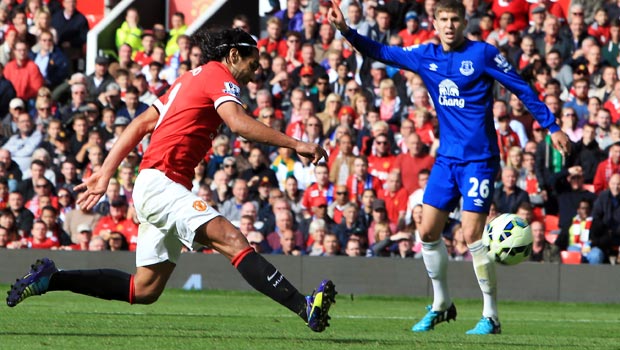 Radamel Falcao was the hero for Manchester United as they overcame a stubborn Everton side at Old Trafford to climb into the top four for the first time in over a year.

The win is sure to provide welcome relief for United manager Louis van Gaal after what has been a challenging beginning to his tenure.

Of particular delight for the Dutchman will be the match-winning contribution of two of his summer recruits.

Record signing Angel Di Maria was the creative spark, not for the first time this season, that inspired the win.

The winger gave United the lead in the first half and, after Steven Naismith had drawn the Toffees level, Di Maria’s second-half shot was turned into the net by Falcao to seal the three points.

The goal for Falcao is a timely one for United.

Captain Wayne Rooney had to sit out the visit of his former club as he began a three-game suspension for his petulant sending off against West Ham last week.

Falcao had failed to find the net in three previous outings since arriving on a season-long loan from Monaco.

Goalkeeper David de Gea was in inspired form for the hosts and saved a penalty to help secure the victory, which propelled United into fourth spot ahead of Swansea, Tottenham – who beat Southampton 1-0 – and Arsenal, who lost 2-0 at leaders Chelsea on Sunday.

The win marks successive league wins for United under van Gaal for the first time and will send both coach and players into the international break on a high.

Man United are 1.74 to make it three wins on the trot against West Brom, who are on offer at 3.86, at the Hawthorns when they clash on October 19.