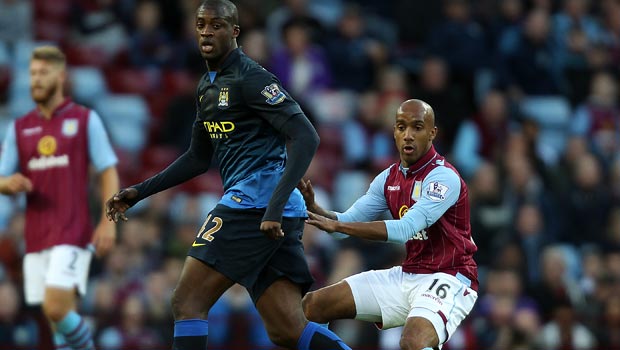 Manchester City left it late to secure three points against a stubborn Aston Villa side on Saturday and the champions’ manager Manuel Pellegrini reserved special praise for match-winner Yaya Toure in the aftermath.

City poked and probed at Villa’s defence for long spells in the second half but it seemed they would be left frustrated until Toure broke the deadlock eight minutes from time.

The Ivory Coast midfielder ran at the heart of Villa’s well-drilled defence and curled home a shot from 18 yards to finally break the resistance of Paul Lambert’s team, with Sergio Aguero sealing the points with a drilled effort past Brad Guzan in the 88th-minute..

Pellegrini retained faith in his player despite his form not being quite as explosive as last season.

“I know perfectly the way he thinks and the way he can play,” Pellegrini said.

“Like every player he can have better games or not so good games, but I have never had any doubts about him.”

Toure scored 20 league goals for City last season and had already amassed eight at this point in the campaign, but Saturday’s strike was his first league goal of the campaign.

His manager is hoping the Villa Park goal will spark a return to that level of form that played such a pivotal role in City landing a second Premier League title in three years.

“Of course, it is very important for him to score his first Premier League goal and I hope now we see the Yaya of last season,” the City boss continued.

“He is one of the best midfielders in the Premier League, without any doubt, and he is very important to us.”