QPR’s case for the defence 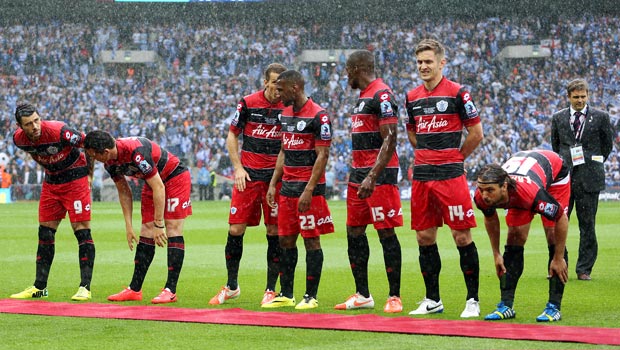 Promoted Queens Park Rangers could have a new-look central defence when they return to the Premier League next season.

The Hoops secured their top-flight status via the Championship play-offs in May but need to revamp their back four to stand a chance of avoiding relegation in 2014/15.

QPR are understood to have agreed a deal in principle with former England defender Rio Ferdinand, 35, following his release by Manchester United this summer.

The club have also agreed a fee with Cardiff for in-demand centre-half Steven Caulker, 22, who is just the kind of player boss Harry Redknapp needs to add to his squad.

However, the veteran manager could struggle to get QPR officials to sign off the Ferdinand deal given owner Tony Fernandes’ comments about having his “fingers burned” by signing big names the wrong side of 30 from bigger clubs.

Redknapp knows Ferdinand well having brought him through the ranks at West Ham and it would be a big setback if he was not able to convince his paymasters to bring the former Leeds star back to London.

Nobody at Loftus Road would need too much persuasion to sign Caulker who looks set to leave Cardiff after they were relegated from the Premier League last season.

The big issue with Caulker is the fact other clubs are monitoring the situation so Redknapp would have to pull off a real coup to bring the one-cap England international to west London.

Any new arrivals will compete with Richard Dunne, Clint Hill and Nedum Onuoha for a place in the heart of QPR’s back four.