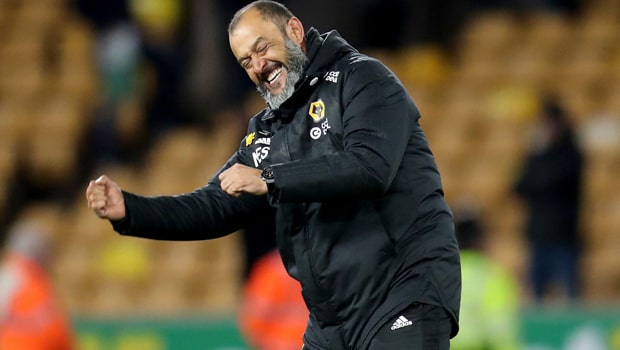 Nuno Espirito Santo said his side can now fix their focus on facing Watford in the FA Cup semi-final after recording a second win over Manchester United at Molineux.

Wolves had dumped the Red Devils out of the FA Cup in the quarter-finals last month and they dealt another blow to Ole Gunnar Solskjaer’s side with a come-from-behind 2-1 Premier League success that dents United’s top four hopes.

Scott McTominay had fired the visiting side into a deserved lead after 13 minutes but the hosts equalised 12 minutes later as Diogo Jota coolly finished from a neat Raul Jimenez pass.

Skipper Ashley Young then picked up two yellow cards in a little over five minutes for fouls on Jota after half-time, leaving United a man short.

Their misery was compounded when Chris Smalling forced the ball over his own goal-line inside the final 15 minutes. The win lifted Wolves back into seventh spot, while Watford’s 4-1 win over Fulham hoisted them into sixth place.

The two sides will now clash at Wembley this weekend for an FA Cup final spot and the Wolves boss is eager for that game now.

“The preparation starts now for the [FA Cup] semi-final – we will rest and prepare for a difficult game. A fantastic challenge for us,” he said.

It was hard to ask more of his team, Santo suggested, though he did feel they could have been more clinical with the chances that came their way. “What more can you ask? We know it was very difficult.

The extra effort the boys had to make and how they react to the first goal – I’m really pleased,” he added.

“Even after the red card it is always difficult against United. We created spaces and had more chances. If there’s one thing I can complain about it is being more clinical.”