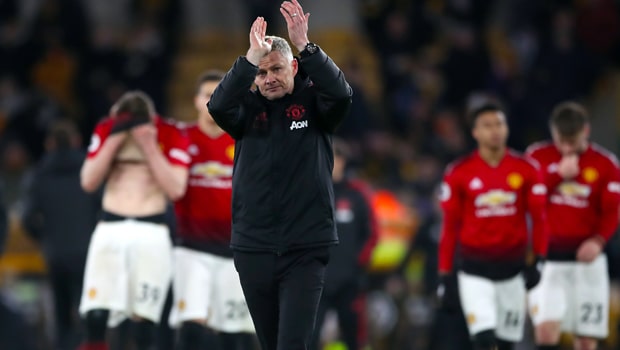 Ole Gunnar Solskjaer suggested Manchester United had failed to make the most of the “big moments” in the game as they lost 2-1 to Wolves at Molineux on Tuesday.

It was a second loss to Wolves in a month, the Red Devils having also crashed out of the FA Cup in the Midlands, and dented Solskjaer’s hopes of securing a top-four finish this season. His team are fifth, level on points with Tottenham in fourth but having played a game more.

Spurs and Chelsea can put distance between themselves and Man United if they overcome Crystal Palace and Brighton respectively on Wednesday evening.

Scott McTominay’s low strike from 22-yards gave the visiting side a perfect platform before the quarter hour in a game where they were well on top.

However, Diego Jota levelled 12 minutes later, with Solskjaer admitting his troops should have done more damage when they were in the ascendency.

“We played some fantastic stuff, first 20 minutes we should have been two or three up and I’m not exaggerating, but we didn’t pounce on big moments in the game,” said the United boss.

“There were a couple of mistakes from us. We gave them that first goal, we have to be honest.”

Skipper Ashley Young picked up two bookings in the space of five second-half minutes to hand the initiative to Wolves.

United tried to fend off their hosts but Chris Smalling eventually bundled the ball over his own goal line with 13 minutes remaining. Solskjaer had no complaints about his captain’s red card.

“When you’re on a yellow and you go in you’re always in danger of getting another one. He hit the ball but followed through and hit him. It’s a yellow card,” he said.

“With 10 men it’s hard but we had to keep the ball. We didn’t want them to put pressure on us. They scored with their first chance after the sending off and you have to give them credit for that.”

Next up for Manchester United is Barcelona in the Champions League next Wednesday. The Red Devils are 3.60 to win the first leg, with Barca favourites at 2.05 and the draw priced at 3.60.