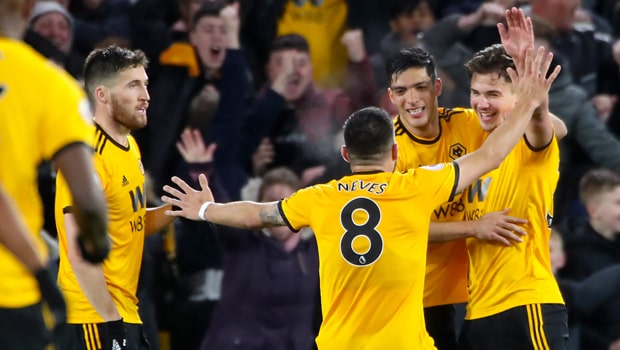 Raul Jimenez feels there is no reason why high-flying Wolves shouldn’t target Champions League football in the future after becoming the club’s record signing.

Nuno Espirito Santo’s side have enjoyed a fine campaign in the top flight after coming up from the Championship last season.

They are currently in seventh spot, a point clear of Watford, with whom they’ll contest an FA Cup semi-final on Sunday.

Wolves are 14 points adrift of Manchester United in sixth spot and 16 behind a top-four place with six games remaining.

The Mexico international’s loan from Benfica will become permanent in the summer after the clubs struck a deal worth £32m and Jimenez is setting high targets for his future at Molineux.

“This is our first time in the Premier League for a while, we are doing well, so why not think about aiming for the Champions League or the top six,” Jimenez said.

Jimenez, Wolves’ 15-goal leading scorer this season, has penned a four-year contract in the Midlands and he wants to ensure they end this season with European football to look forward to next term.

“We have very good players, a good team that can compete. We have to think about the best things we can. If we qualify for the Europa League that would be amazing,” he added.

“I have never played in that tournament. It was an extra since I arrived here. I’ve seen the team is growing.

“The chairman, too, is doing good things. Now we are seventh. For a promoted team that’s very good.”

Wolves are 2.50 favourites for Sunday’s showdown with Watford at Wembley. The Hornets are 2.88 while the draw is priced at 3.20.