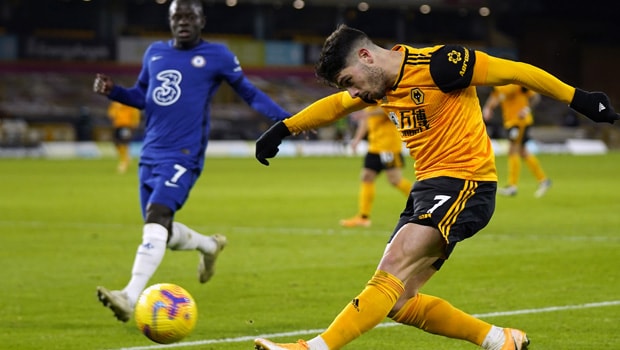 Chelsea lost two games back to back in the Premier League this season after their 2-1 loss to Wolves at the Molineux Stadium.

A late stoppage-time from Pedro Neto gave the Nuno Espirito-Santo their first win in three games since their 2-1 victory at the Emirates Stadium on the 29th of November.

After a goalless first half, Chelsea took the lead in the 49th minute through Olivier Giroud before Daniel Podence gave the team the equalizer in the 66th minute.

Chelsea failed to beat Russian side Krasnodar in their last UEFA Champions League group stage match with a 1-1 draw at the Stamford Bridge.

Since then, the Blues have lost to Everton in the Premier League at the weekend before the Tuesday evening match.

Wolves, on the other hand, has lost to Liverpool and Aston Villa before the game at the Molineux Stadium.

Meanwhile, Manchester City drew 1-1 with West Brom on Tuesday evening in the Premier League. Ilkay Gundogan gave Pep Guardiola’s side the lead on the half-hour mark, but an own goal by Ruben Dias drew both teams level two minutes before half time.

The draw is West Brom’s first points in three matches after two back-to-back losses, and Manchester City is now five points away from the top of the log with the results.

On Wednesday, Arsenal will play against Southampton, while in other matches Leeds United and Newcastle, Leicester City will host Everton.

Fulham and Brighton will play, Tottenham and Liverpool will face each other, while Crystal Palace will face West Ham in a London Derby.