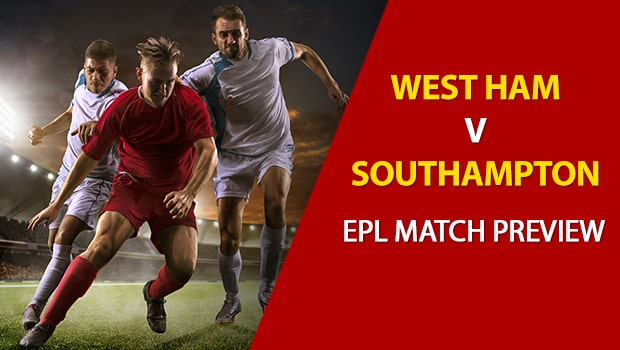 We’ve got a fun matchup this Saturday at London Stadium as West Ham and Southampton go head-to-head. AccuScore simulations have a different take on this game than most offshore picks makers.

Draw: There’s a 27 percent chance the match ends in a draw. There’s a draw in 27.8 percent of AccuScore sims, suggesting some added side value on the draw – but not much.

Building Momentum: West Ham head into this match with a lot of momentum having put a wrench in Tottenham’s top-4 hopes last week. A second-half goal by Michail Antonio sealed the 1-0 victory as he went down in history as the first opposing goal scorer in Tottenham’s new stadium.

Pierre-Emile Højbjerg has a 15 percent chance to score for Southampton. He averages 1.85 shots overall per sim, 0.67 shots on goal per and 0.17 goals per sim.

There’s a 49 percent chance West Ham win this match by at least a 1-goal margin. They win 56 percent of AccuScore sims by an average of +0.79 goals. The added side value on West Ham is a 4-star (out of four) hot trend pick.