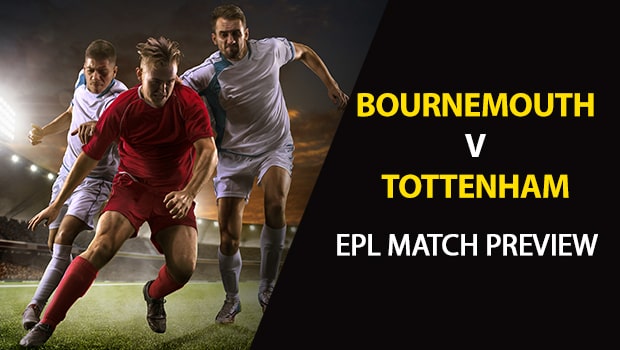 AFC Bournemouth and Tottenham go head-to-head this weekend at Vitality Stadium as the Spurs look to bounce back after a 1-0 loss vs West Ham.

Draw: There’s a 25.5 percent chance the match ends in a draw. There’s a draw in 23 percent of AccuScore sims, suggesting no added side value on the draw.

Last 6: Bournemouth have 1 win, 3 losses and 2 draws in their last 6 overall. Tottenham have 3 wins and 3 losses.

Goals-Against: Callum Wilson had to score a goal late vs Southampton to even it up at 3 goals apiece. Only relegated Fulham and Huddersfield have conceded more league goals than Bournemouth this season.

Head to Head: These two sides last met in Premier League action on Dec. 26, 2018 when Tottenham won, 5-0. Bournemouth last defeated Tottenham in any competition back on Feb. 16, 1957.

Callum Wilson has a 32 percent chance to net the ball for Bournemouth this weekend. Wilson averages 2.12 shots overall per sim, 0.87 shots on goal per and 0.38 goals per sim.

There’s a 51 percent chance Tottenham win this match by at least a 1-goal margin. They win 55 percent of AccuScore sims by an average of +0.80 goals. Tottenham winning is a 3-star (out of four) hot trend pick.