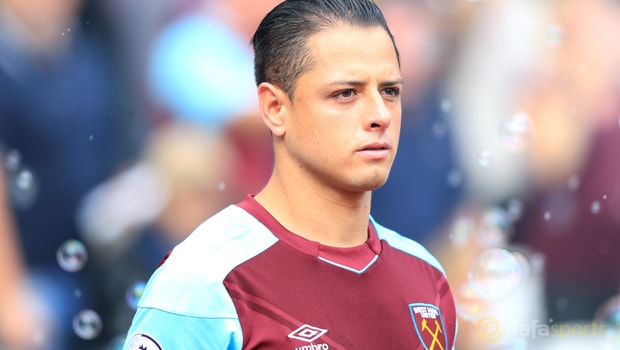 West Ham United striker Javier Hernandez insists he is happy at the club despite rumours claiming he was looking to leave in January.

The Mexico international only joined the Hammers in the summer, signing from Bayer Leverkusen for £16million.

The former Manchester United striker has endured a frustrating start to his career at the London Stadium, but he has still scored three goals in seven league appearances.

Boss Slaven Bilic has used him on the left side of a front three on occasions, with Andy Carroll’s return to fitness forcing Hernandez out wide.

Bilic’s men have endured a frustrating start to the campaign after picking up seven points from as many matches but Hernandez insists he is happy in London.

The Hammers are 15th in the table after winning just two of their games so far, against Huddersfield Town and Swansea City.

Recent reports had claimed the 29-year-old had urged his agent to talk to Spanish clubs, with Sevilla and Valencia both interested in his services.

However, in a bid to quash the rumours, Hernandez tweeted on Saturday night: “That’s a lie! I’m very happy at West Ham!! #COYI.”

Hernandez will be looking to maintain his scoring run when he returns to club duty next week.

He scored in Mexico’s 3-1 victory over Trinidad and Tobago on Saturday night and should start the game against Burnley.