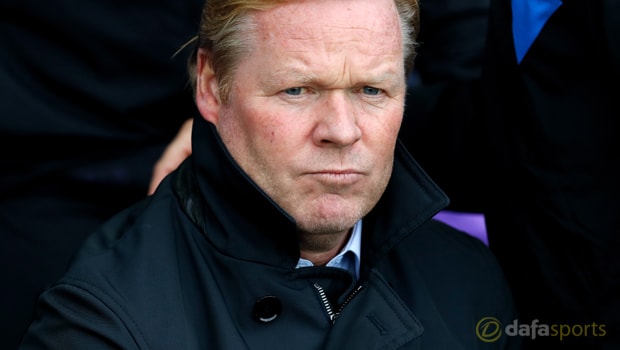 Everton boss Ronald Koeman insists he is not feeling the pressure despite his team’s poor start to the campaign.

The Toffees are currently 16th in the Premier League table after a number of poor results in their first seven league games.

Koeman’s men are just two points above the relegation zone after picking up just seven points this season.

In their first few games, Everton have already played Manchester City, Chelsea, Tottenham and Manchester United but their fans are disappointed with the manner of the performances so far.

They were beaten 1-0 by Burnley in their last game before the international break, while they have yet to win in the Europa League.

Some fans claim they are struggling without Romelu Lukaku but Koeman is refusing to panic.

He told Dutch newspaper De Telegraaf: “I accept that everyone is entitled to his opinion and as a coach I don’t run away from criticism.

“We know within Everton that we currently play under our level and that the results should be better.

“The moment I made the move from Southampton to a club with such ambitions, I knew I could be in a difficult situation if investments were not accompanied by results.

“I’m pretty calm with it. I do everything with the rest of the staff and we work even harder to get those results fast.

“I have also said in England that I’m exactly the same coach as in the past few years when it went well. “I make sure that the feeling with the group stays good and I follow the line we used.”

Everton will be looking to return to winning ways when they take on Brighton on Sunday October 16 and they are the 2.38 favourites to pick up three points. Brighton are available at 3.25, with the draw priced at odds of 3.20.