West Ham To Be Without Declan Rice For A Month 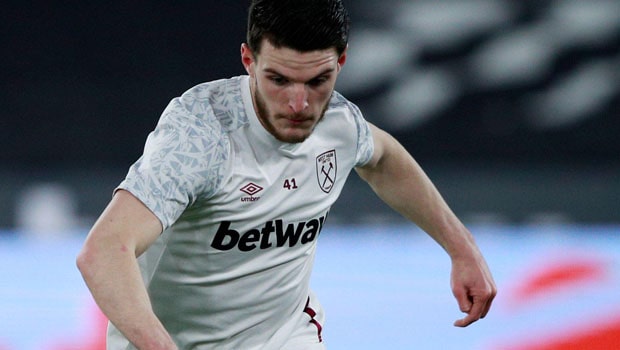 West Ham United dealt a big blow after midfielder Declan Rice was declared to be out for a month.

The midfielder got injured while on international duty with the Three Lions of England although he had played in the wins against Albania and Poland.

The injury means Rice, who has played every game of the Hammers this season, will miss Monday’s clash against Wolves at the Molineux Stadium.

David Moye’s men sit close to the European spots in 7th position with 47 points from 29 matches played before Monday’s match.

However, they are just two points from Tottenham in fifth position and four away from the last UEFA Champions League place where Chelsea are placed in 4th position.

West Ham United did enough to boost their chances of finishing in the top six of the Premier League as they chase a place and the European competitions.

The Hammers defeated Wolverhampton Wanderers by three goals to two.

David Moyes men breezed into the lead in the first half when Jesse Lingard scored in the sixth minute.

Pablo Fornals doubled the advantage 8 minutes after the first goal. Jarrod Bowen made it 3-0 to West Ham in the 38th minute before Dendoncker pulled one back for Wolves before halftime.

Fabio Silva set up a tense finish when he made it 3-2 in the 68th minute, however, Wolves failed to find the third goal.

The win pushed West Ham into the fourth position one point above Chelsea.

Meanwhile, Everton and Crystal Palace played out a 1-1 draw on Monday evening.

James Rodriguez gave the Toffees the lead in the 56th minute of the second half while substitute Michy Batshuayi equalized with just four minutes to play despite just getting substituted into the game in the 84th minute.