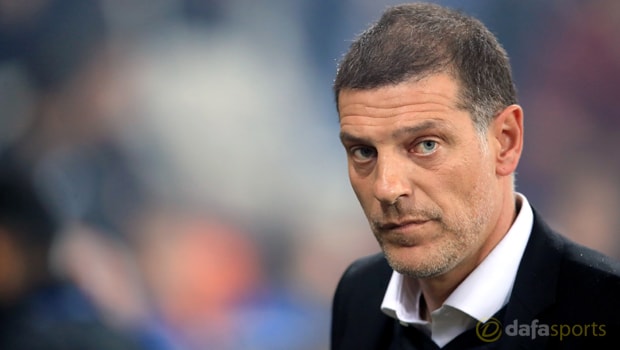 Slaven Bilic says Burney boss Sean Dyche deserves real credit for the strong start his side has made to the season.

Bilic takes his West Ham team to Turf Moor on Saturday with the Clarets sitting proudly in sixth place, having collected 12 points from a daunting opening run of seven games.

Burnley are unbeaten away from home, having already travelled to champions Chelsea, Tottenham, Liverpool and Everton – yielding two wins and two draws.

They’ve also got a home win over Crystal Palace and will be confident ahead of their game against West Ham.

Bilic says his opposite number should be credited for what Burnley have done, though the Hammers boss admits to being ‘surprised’ at results befitting a club of greater stature.

“He’s definitely a good manager. Does their start surprise me? Yes, it did, especially their away form because last year they waited until March or whenever to beat Palace away and get that first away win,” said Bilic.

“If you ask which team has beat Chelsea and Everton and drew against Spurs and Liverpool and didn’t know it was them, you would say Manchester United and not Burnley.”

Bilic expects a typically trough encounter and he says Burnley have added new layers to their play, whilst remaining true to the traits that served them well in surviving last term.

“It’s a big achievement and it did surprise me, but they now have experience of the Premier League and have confidence and play with more bravery and more freedom when they have the ball, but they didn’t lose the steeliness and compactness that is still the core of their philosophy,” he added.