Jamie Vardy back for Baggies clash 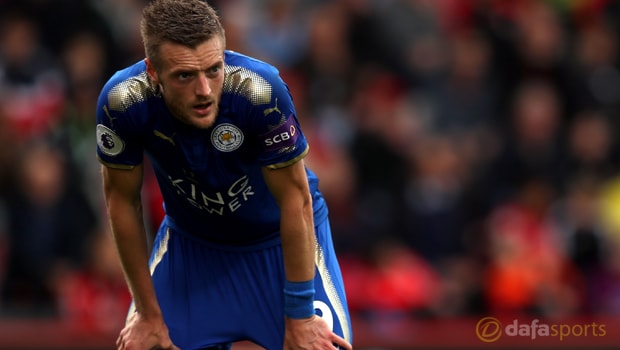 The forward needed pain-killing injections in a hip problem following the Foxes’ stalemate with Bournemouth at Dean Court before the international break.

That was enough to ensure Vardy missed out on England duty as Gareth Southgate’s side sealed their place at next summer’s World Cup in Russia with victories over Slovenia and Lithuania.

Vardy however will be fit and raring to go when the Baggies come calling. “Vardy has fully recovered from his hip problem.

He had the injections straight after the Bournemouth game and he was given time away as he wasn’t allowed to do anything,” Shakespeare told a press conference.

“He has trained fully this week and looked sharp,” he added.

“I’m really pleased to report there are no ill effects.

Hopefully he can go forward for us, and for the national team if he’s selected.

Shakespeare meanwhile has revealed that Adrien Silva has finally been cleared to start training with the club.

The Foxes signed Silva on the final day of the summer transfer window but the £25m deal was 14 seconds late arriving onto Fifa’s system, meaning his registration was withheld and he has been in limbo since, unable to train at Leicester.

That has now been rectified, although Silva is not likely to be cleared to play until January. “I can thankfully report he is training with us,” Shakespeare said.

“Obviously I am disappointed with the decision by Fifa. The other processes are in the hands of the club.

“I think it was always difficult during this saga if you want to call it that. He had to miss out not just on club football, but also national football.”