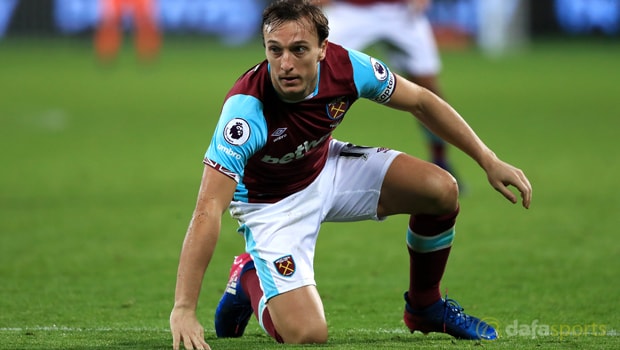 West Ham skipper Mark Noble is remaining confident that Slaven Bilic will be able to further strengthen the Hammers squad this summer.

The club have already managed to secure ex-Manchester City defender Pablo Zabaleta and they have been linked with a move for Arsenal striker Olivier Giroud.

The Hammers could also be set to bring in England goalkeeper Joe Hart on loan if he is unable to find a permanent move this summer, while Werder Bremen striker Max Kruse is another reported target for Bilic.

West Ham endured something of a testing first season in their new London Stadium home, eventually finishing in 11th spot.

Noble believes that plenty of work is going on behind the scenes to ensure they have suitable additions to carry the club forward into the new campaign. “I think we need to get a few in.

I’m sure the chairman is working tirelessly to get them in but this market is so hard,” he told Sky Sports.

“Players are so expensive now and you get priced out. We’re competing with so many other teams to get the players we want.”

According to Noble, Zabaleta is in for something of a culture change swapping Manchester City for West Ham, but he says the Argentine veteran has already impressed him with his eagerness to get stuck into the new challenge he faces.

“He’s an all-round good fella. It’s going to be a change for him because he’s used to having the ball for 70 or 80 per-cent of the game,” Noble added.

“I’ve spoken to him on text already and he’s really keen to meet the lads in pre-season.”

West Ham are 9.00 to win their first game of the season away at Manchester United, while the London side are 9.00 to be relegated next term.