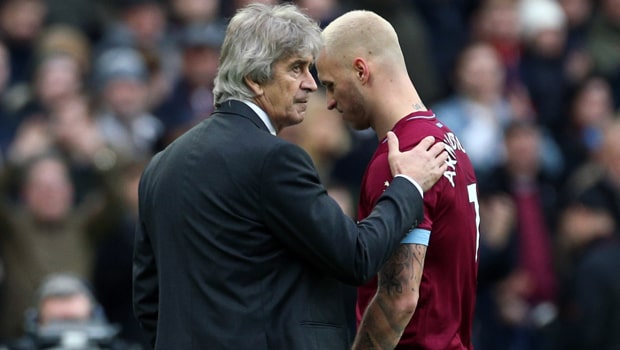 West Ham boss Manuel Pellegrini says the club are no closer to allowing Marko Arnautovic to leave while he doubts the Austrian will go on strike if a move fails to materialise.

Arnautovic is keen on a move to the Chinese Super League although West Ham reportedly rejected an offer of £35m for his services last week. His agent suggested the player was set on the move and advised West Ham to take the money given they’d paid Stoke just £20m to sign the player.

West Ham released a statement insisting they expected the Austrian to honour his contract. Ahead of this weekend’s trip to Bournemouth, Pellegrini has revealed the forward is working well in training and the Hammers boss expects that to remain the case.

“He is working with the team without any problem. He has a contract here, so we will know what happens with that in the coming days,” said Pellegrini.

“Of course you can’t blame him [for wanting the move], he knows what is the best option for him and now we will see what happens between the clubs. I don’t think that the player will refuse to play.”

Meanwhile, Pellegrini has revealed he believes former Arsenal and Manchester City midfielder Samir Nasri has returned to English football with a point to prove.

The Frenchman starred last week as West Ham turned over the Gunners at the London Stadium and his manager feels he has a top player in the 31-year-old.

“He has a lot of quality, in the way he wants to get some revenge in football. His quality, we never had any doubts about him,” Pellegrini said.

West Ham are 2.88 to win at Bournemouth on Saturday. The Cherries are 2.40 and the draw is 3.50 at the Vitality Stadium.