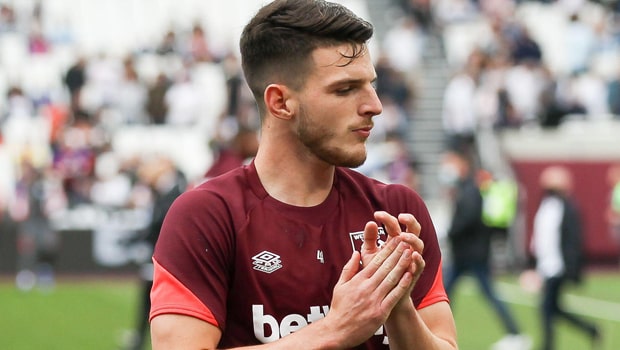 The English man is said to be Manchester United’s main target for next summer’s transfer window.

The Red Devil had a successful transfer window after bringing in French defender Rapheal Varane before a sensational return for Portugese forward Cristiano Ronaldo was sealed.

The former Real Madrid and Juventus forward is expected to make his second debut on Saturday when United welcomes Newcastle United.

22-year-old Rice is contracted to the Hammers till 2024 but it is said that the player is interested in a move to the Old Trafford.

Manchester United stalled on bringing in a midfielder this summer after they failed to get a desired bid for Paul Pogba who was rumoured to be close to an exit.

Meanwhile, United has won two and drew one of their first three Premier League games of the season.

Manchester United defeated Leeds United on opening day before they were held by Southampton and then rounded up the third matchday before the international break with a 1-0 win at Wolves.

The 31-year-old was released by Turkish side Fenerbache and the move represents a return to England for the player after leaving Huddersfield FC in 2018.

He has also gone on loan at Denmark side Fc Copenhagen and Brentford manager Thomas Frank believes that the player also known as Zanka will bring in experience to the side.

“Zanka brings a wealth of experience from different leagues and a lot of international games, that experience and leadership is especially important, and it is great to get him in.” said Bees boss Thomas Frank.

Sheffield will face Brighton when the Premier League resumes this weekend.