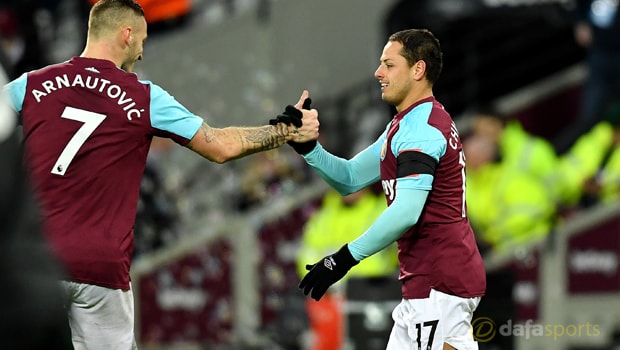 West Ham United striker Javier Hernandez is confident his partnership with winger Marko Arnautovic will be enough to help them avoid relegation this season.

The duo were on top form on Saturday as the Hammers won their first game in four against Watford.

Hernandez opened the scoring with a header in the first half, before Arnautovic wrapped up the victory just days after recovering from a hamstring injury.

Hernandez has now scored three in four league games, while Arnautovic has scored seven in 11 in all competitions.

The former Stoke man had missed the last three weeks of action due to injury but he helped David Moyes’ side move up to 12th in the table.

They are now five points above the bottom three and Hernandez is confident he and Arnautovic can continue to deliver the goods.

He told reporters: “Marko is an unbelievable, all-around player and it gives you a lot of confidence when you play up front with a player like him.

“We have a good understanding with each other and both of us scored. That’s a good thing for a striker.

“Not only did we score, but the whole team ran with high intensity and we showed that we wanted the three points.

“Three points are three points whoever they come against, and we need to keep going day-by-day and game-by-game because every game is going to be a final.”

West Ham’s next league game is against Liverpool on February 24, with Liverpool 1.25 favourites. The draw is 7.00, while West Ham can be backed at odds of 11.00 to win at Anfield.