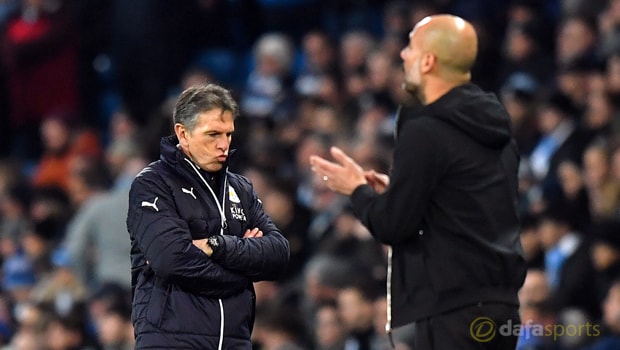 Leicester City manager Claude Puel admits he wants to move on from the 5-1 defeat to Manchester City after Riyad Mahrez made his return to the squad.

The Algerian had refused to train with the club after they turned down a bid from City on transfer deadline day. Following talks the winger returned to training on Friday and started Saturday’s game on the bench.

He was introduced by Puel around the hour mark and both sets of fans welcomed him onto the field, although it was ultimately a miserable afternoon for the Foxes man.Raheem Sterling opened the scoring for City before Jamie Vardy then made it 1-1.

However, Sergio Aguero then stole the headlines as he scored four goals to help City extend their lead at the top of the table to 16 points. When asked about Mahrez and the game, Puel admitted he wanted to move on.

He told reporters: “I’ve said a lot of times it was important Riyad came back to work hard in training. He has maintained good fitness to come back quickly. Now we need to look forward, to move on with all our best players.

“We had some luck to come back in the game after their first goal, we conceded the goals in a bad time just at the beginning of both halves.

“They killed the game with the second and took confidence, and then it’s difficult to resist against a team like this. They press, they play between the lines.

It’s difficult to start and have a certain position against them – but it’s a lot of goals conceded, which is a shame.”

Leicester are next in action on Friday night when they take on Sheffield United in the FA Cup.