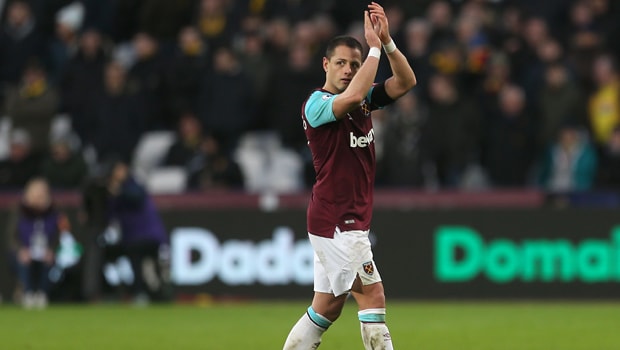 West Ham striker Javier Hernandez is enjoying life under new boss Manuel Pellegrini and says they are aiming to challenge for a spot in the top six.

The Hammers will begin a new era on Sunday when Pellegrini leads his men out for his first competitive game against Liverpool at Anfield.

After battling against relegation for the most part of 2017/18, West Ham fans are hopeful the experienced Chilean can massively improve their fortunes this season.

Hernandez has enjoyed adapting to Pellegrini’s style during pre-season and feels their pressing approach will provide him with plenty of chances.

“Manuel Pellegrini is a great manager. He went to Spain then he came here to the Premier League and he did really well.

I’m not saying anything new there, he’s a great manager and we’re very happy that he chose to come here,” Hernandez told West Ham’s official website.

“The manager wants to play a more controlled, offensive style of play so it’s perfect for a striker.

Chances are going to come and we are improving to defend better, too, to press and recover the ball in a high zone.

“That will make it more difficult for our opponents to get to our goal, so it has been very good so far.”

Slaven Bilic helped West Ham, who are priced at 34.00 to finish in the top four, achieve a seventh-place finish in 2015/16 and Hernandez admits they are targeting an even higher position this term.

He added: “Top six, top four is the aim, as high as we can. I’m a dreamer. I work hard and my thoughts are always positive.

I am always aiming as high as I can and if we can put West Ham in the Champions League, why not? That’s the dream, that’s the idea, and hopefully we can get it.”