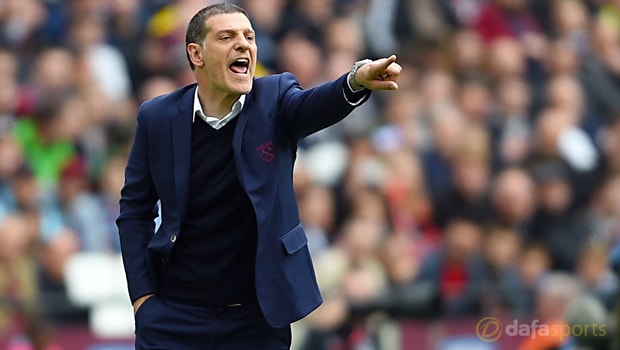 Slaven Bilic’s future as West Ham boss will reportedly by decided by the outcome of his side’s final two home games of the season.

The Croatian took over at the club, where he spent 14 months as a player in the mid-90s, in June 2015 and enjoyed a strong opening campaign in the dug-out, guiding the Hammers to seventh.

However, things have not goner well this time around and, after a disappointing summer in the transfer market, the team have struggled on the pitch.

Most frustrating of all has been their inconsistent performances at the London Stadium since moving from Upton Park.

After their shock elimination from the Europa League at the hands of Astra Giurgiu, the Irons have continued to flounder in their more sizeable surroundings.

With his team now 15th in the table following a four-game unbeaten run, Bilic has reportedly been told his chances of keeping his job will hinge on the team’s results in their closing two home fixtures.

West Ham welcome Tottenham on Friday evening for a game they are 7.50 to win, with the draw 4.50 and Spurs the 1.40 favourites.

They then host third place Liverpool on May 14, before closing their season away at Burnley the following Sunday.

It is believed the club’s form at the London Stadium has become a huge worry for the board, with a pair of heavy defeats against Manchester City and a poor showing against Arsenal of most notable concern.

However, the 48-year-old appears to retain the support of the majority of the fans, while there is also believed to be an acceptance from the hierarchy that their lack of investment in the summer has at times left him short of options.