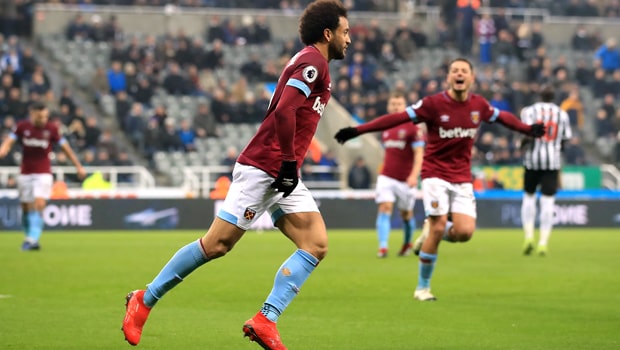 Felipe Anderson is targeting back-to-back Premier League victories for the first time this season as West Ham attempt to haul themselves up the table.

The Brazilian winger played a key role in Saturday’s comprehensive 3-0 win at Newcastle and, with Cardiff and Crystal Palace both due at the London Stadium in the next week, he is hopeful of establishing a real momentum.

Anderson told West Ham TV: “Certainly this season we haven’t been able to be consistent. We play very well one match and then the next one, we can’t manage to sustain the same level of performance.

“But now we expect to change that flow and manage to have a streak of victories to realise our potential. We have the will and the quality to do it.”

If the Hammers were bruised from their 4-0 home defeat by Manchester City a week earlier, they did not show it on Tyneside.

They got their noses in front courtesy of Javier Hernandez’s 12th-minute strike and then picked off the Magpies at will with a display of lethal counter-attacking football.

Hernandez effectively killed the game off with his second 19 minutes into the second half and Anderson wrapped up the points at the death on an afternoon when the visitors passed up a series of other opportunities.

The 25-year-old said: “It was great to be able to score first so we could use my characteristics and my team-mates to launch counter-attacks, and we were happy to be able to dictate the rhythm of the game.”

West Ham had won only once at St James’ Park in 20 years before their arrival and the ease with which they doubled their tally came as a shock to the Magpies, who were looking for a fourth successive league victory.

The Hammers return to action on Tuesday when they welcome Cardiff to the London Stadium and the hosts are 1.73 favourites to pick up the win, a draw is priced at 4.00 whilst the visitors are 4.75 outsiders.