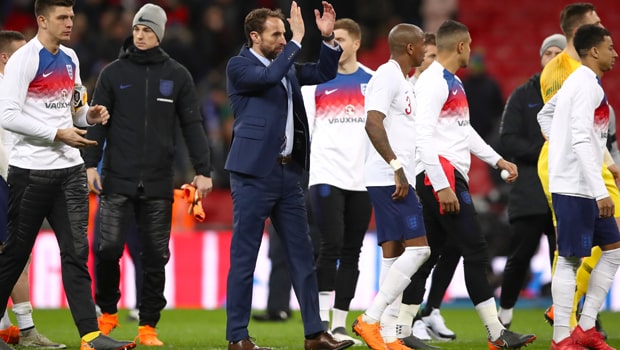 England will be confident of booking their place at the 2020 European Championships after arguably being handed one of the easier looking groups.

The Three Lions, who won their Nations League group which included Spain and Croatia, were the first name out of the hat and are the top seeds in Group A.

Gareth Southgate’s men have been joined by Czech Republic, Bulgaria, Montenegro and Kosovo, and England will qualify if they win or finish runner-up in the group.

If England fail to finish in the top two places, they will have another chance to make the 2020 finals as they are guaranteed a play-off place after winning their Nations League section.

Elsewhere, Northern Ireland face a stiff task to qualify after being drawn in Group C alongside the Netherlands, Germany, Estonia and Belarus.

Scotland, who are also guaranteed a play-off place if they fail to qualify, are in Group I with 2018 World Cup semi-finalists Belgium, Russia, Cyprus, Kazakhstan and San Marino.

The Republic of Ireland, now managed by former Ipswich Town boss Mick McCarthy, are in Group D alongside Switzerland, Denmark, Georgia and Gibraltar.

Ryan Giggs’ Wales have a good chance of qualifying for Euro 2020 after being drawn in Group E with Croatia, Slovakia, Hungary and Azerbaijan.

England are 8.00 to win the 2020 European Championships whilst world champions France, who are in Group H with Iceland, Turkey, Albania, Moldova and Andorra, are 4.75 favourites.