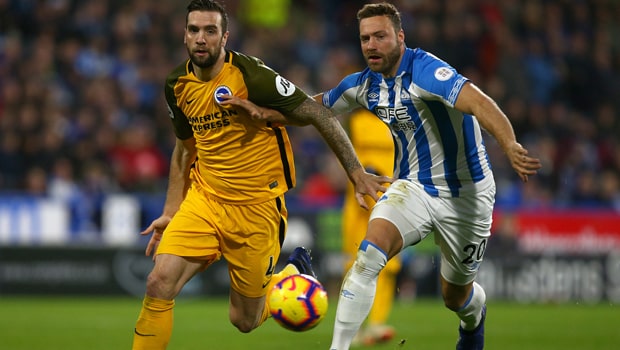 The decision proved pivotal as the Seagulls hit back from Mathias Jorgensen’s first-minute header to secure just their second Premier League away win this season with goals from Shane Duffy and Florin Andone.

Replays showed Mounie had caught Bissouma high on his shin, but second-half substitute Depoitre took issue with some of Oliver’s other decisions.

“I don’t like to speak about the referees, but I think he played a big role in this defeat,” he said.

Town had strong claims for a first-half penalty turned away after Alex Pritchard looked to have been hauled down and Oliver chose only to book Brighton’s Leon Balogun for a challenge on Erik Durm.

“After one minute it was already 1-0 and we felt that we were controlling the game,” Depoitre added.

“They were not very dangerous and then there were a few decisions from the referee that we don’t really understand.

“It changes the game completely. I think it was a clear penalty on Pritchard. It could have been 2-0 and the game would have been completely different. If it’s 2-0 I don’t think we would lose this game.”

Huddersfield return to action on Tuesday when they make the trip to the Vitality Stadium to take on a Bournemouth side that have slipped up in recent weeks.

The Cherries are 1.75 favourites to pick up the win, a draw is priced at 3.80 whilst the visitors are 4.75 outsiders.