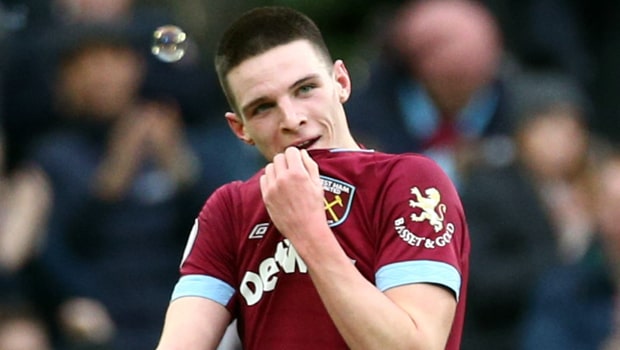 Declan Rice is enjoying the challenge of establishing himself in West Ham’s first team.

The 20-year-old has relished being in the limelight with the Londoners this season, despite a shaky start.

He was subbed off by Manuel Pellegrini on the opening day of the season in a 4-0 thrashing at Liverpool, but that has made him more eager to impress.

Rice was named Young Player of the Year at the London Football Awards on Thursday and is clearly enjoying his football.

“Last year I made some mistakes but I have bounced back from that,” Rice said. “I got subbed at Liverpool, knowing I had to work harder to get back in the team.

“But I have found my place in the team, the manager has shown a lot of belief and trust in me. I am really grateful to him for that.

“I am loving it, I am really enjoying it. Last year was tough because I was in and out of the side and the start of this season was tough. “I am playing with a smile on my face, which is the main thing.”

Having recently declared his international allegiance to England, after previously being capped by Republic of Ireland, Rice has labelled that call the toughest of his fledgling career so far.

“It is the toughest decision I have had to make so far in my career,” he said.

“Being so young, I didn’t think I would ever be in a position to make that call but it’s one that I have made and one that I am looking forward to in the future.”