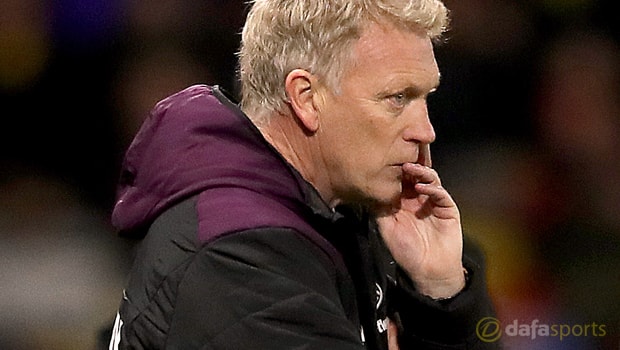 Moyes’ first game as Hammers boss ended in a 2-0 loss at Watford last weekend and, while he said he could not question the attitude shown by his players, he is targeting an increase in terms of quality.

That result left West Ham in the bottom three with just two wins from 12 games and Moyes was disappointed with the standard of football from his team at Vicarage Road.

“I think their attitude and their application wasn’t in question for me against Watford, far from it, we could show that wasn’t the case, so I think that’s the first thing we need to say,” Moyes said.

“But I’m looking for better quality play, I’m looking for more opportunities albeit I don’t think we’re going to get many better than the last game but we just need to improve our all round play really.”

Having been placed in charge of the club until season’s end, Moyes is calling for togetherness at West Ham.

The Londoners’ supporters were vocal in their criticism at Watford, and the Scot knows that having everyone pulling in one direction will be crucial to his success or otherwise. Providing the sort of football West Ham fans want to see will help, he says.

“I want everybody to be together and be united and help each other along,” said Moyes.

“West Ham have always been a really vocal support, I can vouch for that over the years.

For years and years I came and you’re always looking forward to getting away from Upton Park after the game because you knew it was going to be tough so we want them to be supportive of the team.

“They are knowledgeable supporters, they’ve seen a lot of good stuff going on over the years here and they will be wanting the team to play well.”