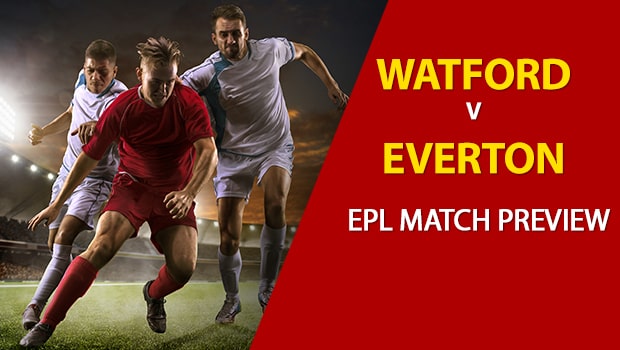 This weekend’s matchup between Watford and Everton at Vicarage Road Stadium doesn’t necessarily invite the average fan to tune in, but there’s some side value on this game that AccuScore has come across.

Draw: There’s a 28.5 percent chance the match ends in a draw. There’s a draw in 29.2 percent of AccuScore sims, suggesting some added side value on the draw, but not much.

Big Chances Missed: Watford leads the EPL this season in big chances missed. Another example of not taking advantage of opportunities.

Building Momentum on the Road: Referee Lee Probert will be the head official for this weekend’s fixture. He has not worked a Watford match this season yet, but the Hornets lost 2-of-3 last year with Probert as the referee.

Head to Head: These two sides last met in Premier League action back in December 2018, finishing in a 2-2 draw. Watford won the previous matchup 1-0 in Feb. 2018.

For Watford, we’ll have our eyes on Troy Deeney who has a 24 percent chance to net the ball this weekend. He averages 1.88 shots overall per sim, 1.02 shots on goal per and 0.28 goals per sim.

There’s a 50 percent chance the total combined score stays under 2.5 goals. That happens in close to 57 percent of AccuScore sims, indicating some added side value on the pick. The average total score in AccuScore sims is 2.42 goals. The under is a 4-star (out of four) AccuScore hot trend pick.