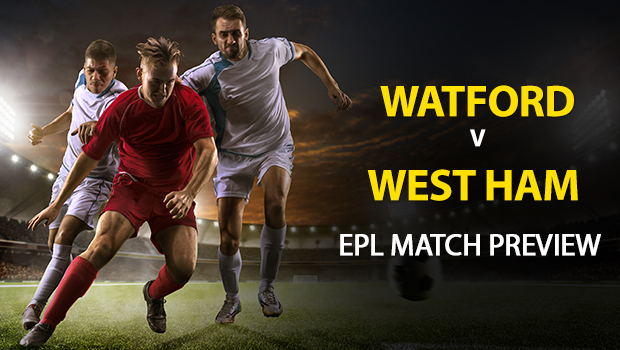 The No. 9 and No. 10 teams, respectively, go head-to-head this Saturday as West Ham and Watford meet at London Stadium. Watford will look to build on its 3-2 win over Cardiff City last time out, while West Ham hopes to extend their win streak to five games after reeling off four in a row.
Let’s take a closer look at where the value is at in this match.

Betting on the Draw: Odds indicate there’s a 27 percent chance the match ends in a draw. There’s a draw in over 31 percent of AccuScore sims, suggesting some added side value on the draw.

Opportunities vs Scoring: Looking at the last 10 matches overall for each team, numbers indicate Watford have been slightly more aggressive. They average 4.4 corners per match compared to 3.7 per for West Ham. However, West Ham averages more goals over that stretch (1.8) than do Watford (1.2). Opportunities are great, but you have to capitalize.

Head to Head: These two sides last met in Premier League action back in February of 2018 when West Ham got the 2-0 victory.

For West Ham, we’ll have our eyes on Felipe Anderson who has a 35 percent chance to score. He averages 1.43 shots overall per sim, 0.75 shots on goal per and 0.43 goals per sim.

Odds indicate West Ham have about a 41 percent chance to win this match in regulation. AccuScore has them winning over 52 percent of sims, suggesting some added side value on the pick. West Ham winning is a four-star (out of four) AccuScore hot trend pick