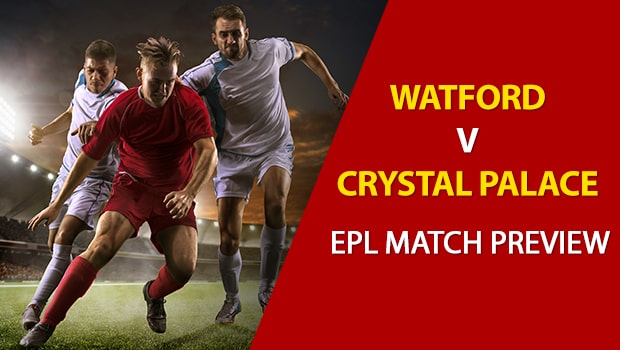 Crystal Palace have won five of their last seven home league matches against Watford, having won at Selhurst Park in each of the last two seasons. Will that trend continue?

Draw: Picks indicate there’s a 29 percent chance the match ends in a draw. There’s a draw in 27 percent of AccuScore sims, suggesting no added side value on the draw.

Looking Forward to It: Crystal Palace forward Jordan Ayew has scored more Premier League goals vs Watford than any other side — scoring at least once in three of his four starts vs Watford.

Ayew averages 1.66 shots overall per sim, and has a 22 percent chance to score vs Watford.

On the Road: Watford have won 13 points from their 10 road league games this season — record three wins, three losses and four draws so far.

Luka Milivojevic has a 29-to-30 percent chance to score this weekend for Burnley, averaging 1.71 shots overall per sim, 0.69 shots on goal per and 0.37 goals per sim.

Crystal Palace have about a 42-to-43 percent chance to win this match. They win over 48 percent of AccuScore sims, suggesting some added value on the pick. Crystal Palace winning is a 2-star (out of four) AccuScore hot trend pick.