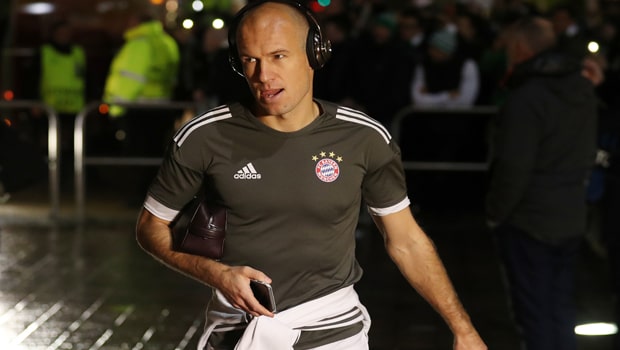 Arjen Robben feels Bayern Munich got the “worst possible draw” when they landed Liverpool in the last-16 of the Champions League.

The Dutchman and his Bayern team-mates will take on Jurgen Klopp’s side next month over two legs and the former Chelsea winger is wary of the Anfield side.

Liverpool lost out to Real Madrid in last season’s final and Robben feels all the signs are there that they must be considered amongst the favourites to raise the trophy this year.

He believes Bayern must try to focus on their own preparation for the tie as they look to win the Champions League for the first time since 2013.

“Liverpool are doing well again, just like last year when they made it to the final, and I also see them as a favourite for the Champions League this season,” he told FootballOranje.com.

“For us, it was perhaps the worst possible draw, but it’s going to be a great challenge. We have to look at ourselves, keep working hard and improve ourselves. If we have a good day and play the way we want, I’m sure we’ll make it very difficult for Liverpool.”

Robben, now in his final season as a Bayern player, was full of praise for compatriot Virgil van Dijk and the impression he has made since joining Liverpool in January.

“He has made big strides lately – just look where he comes from,” he added.

“He has grown as a player, but also as a personality. I am happy for him, where he is at the moment. He is a key player at a gigantic club, and he is the captain of the Dutch national team. He deserves all the compliments.”

Bayern are 13.00 to win the Champions League this season, while Liverpool are 9.00 to raise the trophy.