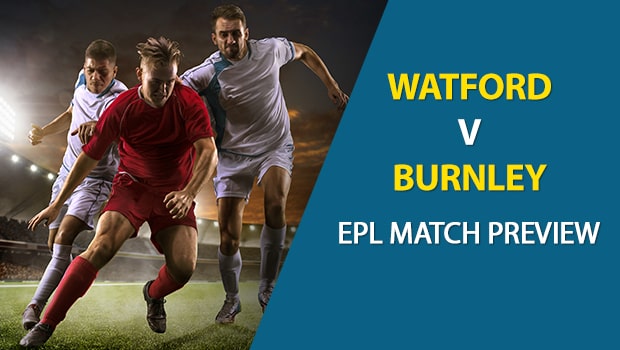 Watford host Burnley at Vicarage Road this Saturday as they both look to build from wins the previous weekend.

Draw: There’s a 24.5 percent chance the match ends in a draw. There’s a draw in 25.5 percent of AccuScore sims, suggesting no real added side value on the draw.

Clean Sheet: Gerard Deulofeu has been playing remarkably well of late for Watford. He had a strong performance with a goal vs Cardiff City last month, and almost scored vs Crystal Palace. He has only 3 goals in Premier League this season, but the momentum is picking up.

Both Sides Scoring: Recent play indicates both sides put up a goal in this one. Burnley have scored twice in each of their last three Premier League matches, while Watford have a similar 6 goals in that span.

Head to Head: Burnley got the 2-1 win last season at Vicarage Road. They more recently met at Turf Moor in August of 2018 when Watford got a 3-1 win.

Ashley Barnes has a 17 percent chance to net the ball for Burnley. He averages 0.9 shots overall per sim, 0.34 shots on goal per and 0.18 goals per sim.

For Watford, we’ll have our eyes on Roberto Pereyra who has a 26-to-27 percent chance to score this weekend. He averages 1.67 shots overall per sim, 0.65 shots on goal per and 0.31 goals per sim.

The under hits in over 62 percent of AccuScore sims, making it a 4-star (out of four) AccuScore hot trend pick.