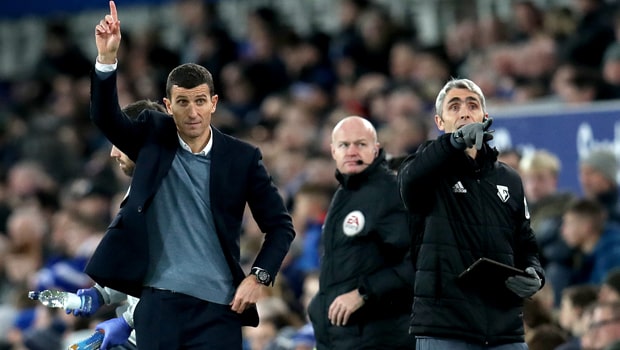 Watford manager Javi Gracia says he is happy with how his team have been playing, despite their recent failure to put points on the board.

Watford have lost seven of their last 11 games, managing just two wins in that spell.

It means they’ve dropped to 13th in the table, though their manager is not about to press the panic button, knowing that a win over Everton would draw his team level on points with the seventh-placed Toffees.

Gracia has seen enough positives in recent games to keep him content, for now.

“In my opinion we are playing well. I like to be demanding of my players because in this way we will improve, we’ll have more options to improve our results as well,” he said.

“But in this moment I’m not worried about if in the last games we weren’t able to get some points. “I think the players have confidence in the way we are playing, the way we are working in all the different games.

“But they also know we need to improve something to have better results, to finish better.”

Watford’s tally of 20 points is their lowest at this stage of a Premier League season since returning to the top flight in 2015.

They’ve managed only nine goals in their previous 11 games, while also keeping just a single clean sheet in their last 13 games away from Vicarage Road.

Watford are 5.00 to win at Goodison, with Everton strong favourites at 1.75 and the draw 3.75 on Merseyside.