Javi Gracia vows to cause problems for City 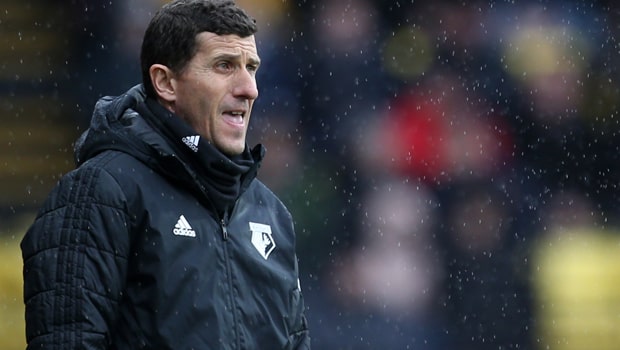 Javi Gracia says Watford can create chances against Manchester City at the Etihad Stadium on Saturday – and he’s adamant they’ll take them when they do.

Pep Guardiola’s team are on course to retain their Premier League title having reeled in long-time leaders Liverpool.

City lead by a point with nine games remaining and they’ve got a near-perfect home record this season.

Despite that Gracia insists his team, currently eighth, can travel to Manchester with optimism that they will get chances.

“I think we feel more comfortable playing at home rather than away, but it is true – this season – that we have got good results playing away as well,” Gracia said.

“Now we are going to play City and we know it’s going to be very difficult.

“They have played 15 games and they have won 14. We know, we know it, but we’ll have some chances to try and take advantage. And we are going to do it.”

Skipper Troy Deeney and Andre Gray netted the goals as Watford scored a 2-1 win over Leicester at Vicarage Road last Sunday, enough to keep them level in points with Wolves in the race for seventh spot.

Gracia is coy on whether or not Gray will keep his place, having come off the bench to good effect in the second half against the Foxes. He does though concede that the pair linked well together early on this season, when the Hornets were arguably at their best.

“I don’t like to speak about what we are going to do but [Deeney and Gray playing together] is a very good option for us,” the Watford boss said.

“They started playing together at the beginning of the season and we were getting very good results and in the last game Andre scored the goal in the last minutes.”

Watford are 19.00 to stun Man City on Saturday by winning. The draw is 8.00 with City overwhelming favourites to win at 1.15.