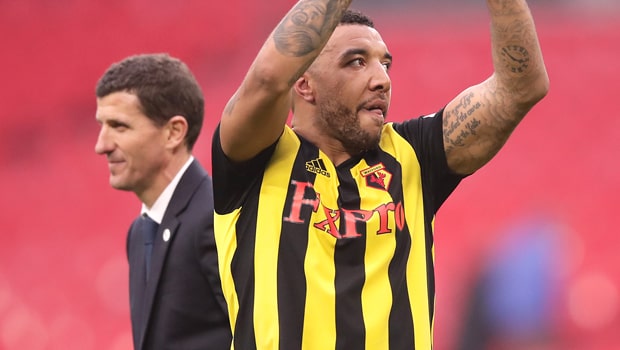 Watford boss Javi Gracia has challenged his players to respond to the loss of their skipper Troy Deeney.

The Hornets striker was sent off against Arsenal on Monday and will miss his team’s next three games, against Huddersfield, Southampton and Wolves.

Gracia still contends the decision to award Deeney a red card but says the team have to respond, and, after defeat to the Gunners, try and get back to winning ways without their captain.

He told the club’s official website: “Like with the rest of the games, I never complain about the players we don’t have. We prefer to give value to the players we have and I try to choose the best XI, the best to compete in the next game.”

They will qualify if they beat Manchester City and win the FA Cup at Wembley next month.

If they lost to City then seventh place in the Premier League would be another route and the Hornets, though currently 10th in the table, are one of four clubs within a point of each other, all vying for seventh, Leicester, Wolves and Everton being the others.

Deeney is one of a number of players missing for Watford at already-relegated Huddersfield.

Jose Holebas, Tom Cleverley, Domingos Quina and Adalberto Penaranda are all out injured, but Gracia was more hopeful on Gerard Deulofeu and Roberto Pereyra who have both returned to training and may return to the squad to take on the Terriers.

Despite their FA Cup success, Gracia will hope his team return to form in the Premier League having lost three of their last four league games.

Watford are 1.91 to win in West Yorkshire on Saturday with Huddersfield 4.20 and the draw is priced at 3.60.