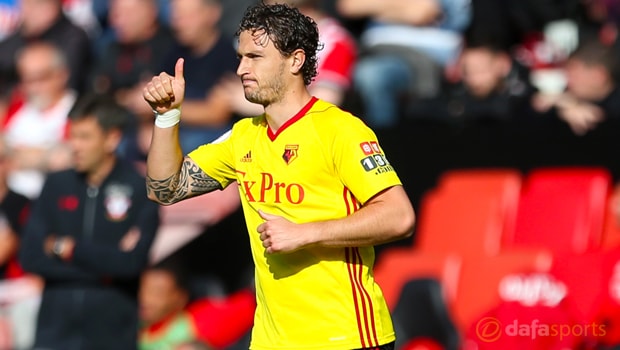 Daryl Janmaat is adamant Watford can go from strength-to-strength this season and he is already eyeing up a potential shock result at home to Manchester City on Saturday.

Watford picked up a comfortable 2-0 victory against Southampton at St Mary’s on Saturday, maintaining their unbeaten start to the Premier League under new manager Marco Silva.

Midfielder Abdoulaye Doucoure opened the scoring with a fantastic half-volley from 30-yards before Holland international Janmaat, who was making his second appearance of the campaign after recovering from an injury picked up in the 3-3 draw against Liverpool, fired a crisp strike in from 25-yards.

The Hornets are now into nose-bleed territory after moving into fourth position in the table, two points behinds Manchester United and the Citizens, who are first and second respectively.

Silva’s men go up against City next at Vicarage Road and Janmaat is confident the impressive start to the campaign can continue if the players keep up their hard work.

“We have got to continue like this and on Saturday we have Manchester City at home and a great opportunity to try to stay up with them,” he said.

“We are playing with a lot of confidence at the moment.

“We have a good team, some good signings, a lot of strength in the team and pace up front.

I think we can threaten a lot of teams with the way we are playing and we can have a great season.”

Watford are 9.50 outsiders to pick up all three points against City, a draw is priced at 6.00 whilst the visitors, who thrashed Liverpool 5-0 on Saturday, are 1.30 favourites.