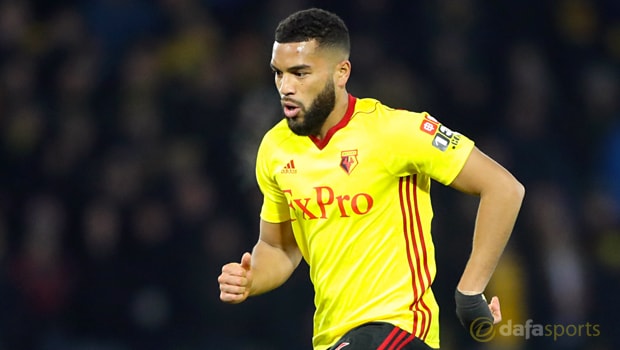 Adrian Mariappa says Watford are “full of confidence” ahead of Sunday’s trip to the Emirates as the visitors look to do the Premier League double over Arsenal.

Watford won the reverse fixture 2-1 back in October – late strikes from Troy Deeney and Tom Cleverley securing the points – and the team are in good form ahead of Sunday’s encounter.

Javi Gracia’s men have won their last two games 1-0, beating Everton and West Brom, and the impressive results have seen the club climb to ninth in the table, just one point behind Leicester City in eighth.

The Hornets will be looking to inflict a fourth straight Premier League loss for the Gunners although the hosts do head into the match on the back of a brilliant 2-0 first-leg victory at AC Milan in the Europa League last 16.

Jamaica international Mariappa, who has made 19 league appearances this season, is feeling good ahead of the meeting and says Watford are heading to Arsenal aiming to win.

“It is going to be a tough game and we will go there full of confidence because we got two wins [in a row],” he was quoted as saying by the Watford Observer.

“We are going to try and get the points on the board again and the manager won’t demand anything less.”

Arsenal, who have eased the pressure on manager Arsene Wenger with that win in Italy, are firm 1.50 favourites to pick up the win, a draw is priced at 4.50, while the visitors are 6.50 outsiders.

The hosts are expected to make some changes to their starting line-up, with January arrival Pierre-Emerick Aubameyang set to replace Danny Welbeck up front.