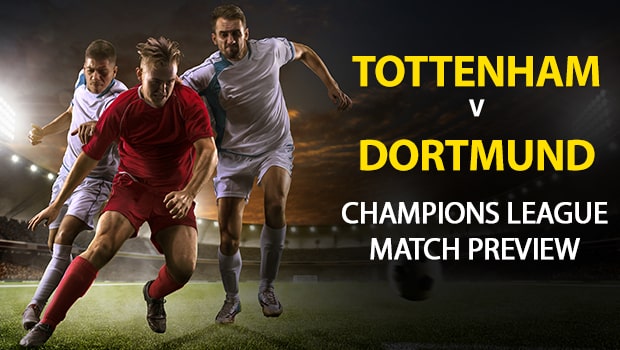 All eyes will be on Wembley this Wednesday in what’s expected to be an entertaining first leg between Tottenham and Borussia Dortmund. Dortmund average 3.67 goals in the 31 fixtures they have played in all competitions this season, having failed to score in just three games. Injuries, though, could have an impact on the scoring potential in this game.

Total: There’s a 48.8 percent chance the match ends in a score with the total combined score under 2.5 goals. The under hits in over 86 percent of AccuScore sims, suggesting quite a bit of added value on this pick.

The average combined score after 10,000 simulations is 1.3 goals.

Recent Play & Momentum: Dortmund has had a successful season thus far, but do enter this match not having won a game in their last three outings. Tottenham reach this last-16 round following a dramatic 1-1 draw with Barcelona at Camp Nou.

Banged Up: Both sides have some major injury concerns with Harry Kane and Dele Alli still out for Tottenham, and Marco Reus dealing with a muscle injury for Dortmund.

Head to Head: These two sides have faced off in competitive play just four times in the past, all within the past three years. Borussia won the first two matchups back in 2016, but Tottenham won the two more recent matchups in 2017.

There’s a 29 percent chance this match ends in a draw. Over 40 percent of AccuScore sims finish in a draw, suggesting quite a bit of side value on this pick.