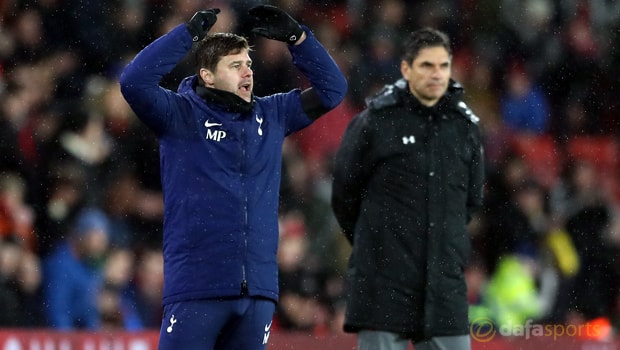 Tottenham coach Mauricio Pochettino insists a virus that had affected the camp was not to blame for their draw with Southampton on Sunday.

Pochettino was unable to select goalkeeper Hugo Lloris and midfielder Christian Eriksen as both withdrew from illness.

he Argentinean admitted a number of his players had struggled in training this week and they left the south coast with a point.

Centre-back Davinson Sanchez scored an own goal before Harry Kane netted his 99th Premier League goal with a powerful header.

Despite the poor performance, Pochettino insists the illness was not to blame and he has demanded more ahead of the FA Cup fourth-round clash with Newport County.

He told Sky Sports: “It was an even game, a difficult game to play.

“In possession, we made a lot of mistakes that allowed them lots of transitions. We created two massive chances but if you analyse the game it was a fair result.

It wasn’t our best version tonight -the pitch didn’t help us but it was the same for both teams. We need to improve.

“Players were affected last week but it’s not an excuse – our performance wasn’t the best – we need to be focused now.”

Spurs will travel to Wales on Saturday for the clash and they could bring in new players but Pochettino insists he is not desperate to bring in new bodies.

He added: “I’m not concerned – it will be difficult to add quality. “I’m relaxed and calm – not concerned. I’m happy with the squad we have. If something happens then we have the conditions to sign players.”

Pochettino’s are expected to cruise to victory against the League Two side and they are priced at 7.00 to win the competition this year.