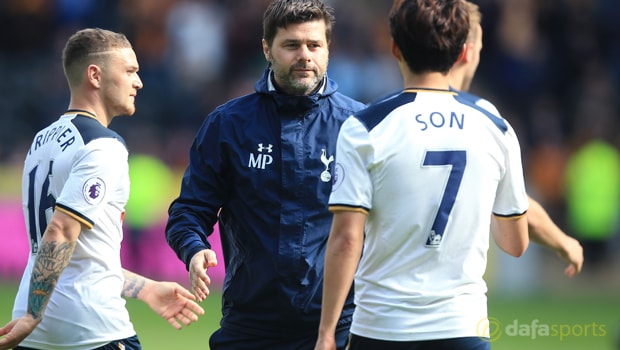 Tottenham chairman Daniel Levy has ruled out any possibility of boss Mauricio Pochettino leaving the club, insisting “he loves us”.

The Argentine has been rightly applauded for his work since taking over in the summer of 2014, carefully harvesting the talent available to him to transform his side into genuine title contenders.

His exploits have not gone unnoticed, with Barcelona previously linked with trying to snare him away as the replacement for the outgoing Luis Enrique.

Pochettino said his loyalty to local rivals Espanyol meant he could never join the Blaugrana but the rumours alone show how highly regarded he is within the game.

The 45-year-old’s current contract runs until the summer of 2021 and he appears keen to continue the good work he has put in over the years in North London.

These are exciting times for Spurs, with them set to move into their temporary home of Wembley for next season, in order for the finishing touches to be put on the renovated White Hart Lane.

After finishing second in the 2016/17 campaign, Tottenham are 9.00 to go one better next time around, with Manchester City the 3.25 favourites.

Following Sunday’s 7-1 win at Hull, the Lilywhites are currently on a promotional tour of Asia.

Levy has now assured supporters that Pochettino will not be leaving Tottenham, adding that the boss feels just as strongly about the club as the players and the fans.

“Mauricio is sitting right in front of us here,” Levy told a press conference in Hong Kong. “I’m sure he’s not going anywhere. He loves us.”