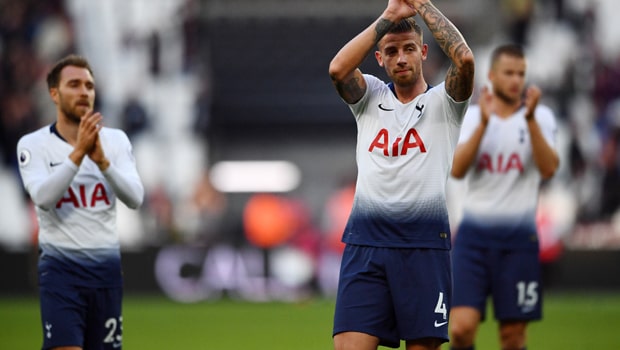 Toby Alderweireld is happy with the development which Tottenham have made during the Mauricio Pochettino era but insists the jigsaw will not be complete until they win some silverware.

The 29-year-old Belgium international central defender joined the club back in summer 2015 from Atletico Madrid and has helped the side qualify for the Champions League via top-four Premier League finishes in the past three successive seasons.

Spurs impressed in Europe last term as they reached the last-16 before going out over two legs against Italian champions Juventus.

Despite the clear progress on the pitch under Pochettino and the upcoming move to their new White Hart Lane Stadium, the north Londoners have still yet to win a trophy since the 2008 League Cup.

Their 2018-19 Champions League hopes already look over after picking up just one point from their opening three matches, while they sit in fifth place in the Premier League despite making their best start to a season with 21 points from 10 games.

The Carabao Cup offers a chance this season, although north London rivals Arsenal stand in their way in a mouthwatering quarter-final tie at the Emirates Stadium next month.

When quizzed about the club’s trophy quest, Alderweireld told Sky Sports: “We are doing everything we can to get, I think every team is doing this. You do not overestimate the performance we did in the last couple of years.

“If you do every point from the last four years, then we will be up there. So it is not one season we played well and then bad, no for a couple of seasons now we play on a high level.

“And the next step is silverware and we are doing the best we can to achieve that.

“We try to play good football – it is not easy, but we try and we can improve a lot more and we do the best we can.”

Spurs’ immediate priority is a trip to face Wolves at Molineux in the Premier League on Saturday night and they are 2.25 to secure a win, while the hosts are 3.25 and the draw is 3.40.