Spurs told to be positive despite more Wembley woe 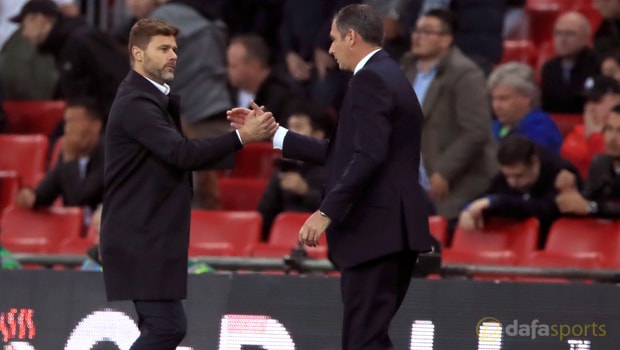 Swansea City frustrated Spurs on Saturday and, with the help of a fine display from ex-Arsenal stopper Lukasz Fabianski, held out for a scoreless draw.

It means Pochettino’s team has failed to win any of their three home Premier League games at Wembley so far, defeat to Chelsea and a 1-1 draw with Burnley having gone before Swansea’s visit.

They did receive a boost in midweek via a 3-1 Champions League success against Borussia Dortmund but their latest stumble ensures the focus is once more on Tottenham’s form at home.

They have gone three league home games in a row without a win for the first time since December 2013, while it was the first time in 30 home league games that Spurs have failed to score.

Pochettino’s men are now five points behind leaders Manchester City in fifth, but the Argentine is not too downcast.

“It is very disappointing because we did everything to win. We created chances and dominated the game but were a little unlucky,” he said.

“I am happy with the performance although it is another game we drew here at Wembley and that is no good.

“I like to talk about my team, we created a lot of chances to score.”

Pochettino did not want to entertain notions of a Wembley hoodoo and says his squad must make the most of their time at the venue. “Last season was a fantastic season at White Hart Lane.

Now that is history and we are building a new stadium and that will be fantastic,” he added.

“I take every season as being different. We have a new dynamic and we need to be positive.”

Spurs are 1.67 to win their next league game, this one at another capital venue when they face West Ham at the London Stadium. The Hammers are 5.00 while the draw is 4.20 for Saturday’s clash.