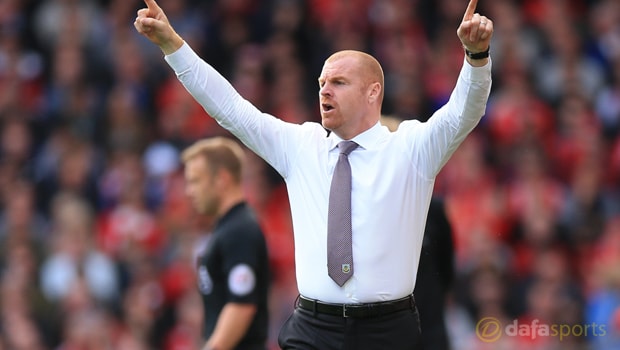 Sean Dyche took great pride in the display his Burnley side gave as they secured a 1-1 draw with Liverpool at Anfield.

The Clarets took the lead against the run of play on 27 minutes when Scott Arfield fired a crisp shot into the net, but Liverpool responded quickly and Mohamed Salah soon had them level.

Jurgen Klopp’s men poured forward for much of the second half, Liverpool having 35 attempts on goal, but they found Nick Pope in the visiting goal in a resilient mood and could not score the vital third goal.

Indeed, Burnley almost stole all three points late in the game, Ben Mee seeing his header cleared off the line by Joel Matip.

Dyche felt it was an effective performance from his team again top opposition.

He felt his players had got the basics spot and that feeding on limited possession was always likely again Liverpool on home soil.

“I’m not afraid to get the ball forward and I thought that was effective.

Our shape was good and Popey was excellent in goal,” said Dyche.

“We know it’s tough coming to these places and we are willing to do the bits that are nitty gritty in the game.

Very few teams will come here and dominate, we knew we would have to do the basics. Now and again you need a bit of luck.

“We are still learning a little bit, me included but I’m very pleased with [that display].”

Burnley are 2.30 to win their next league game at home to Huddersfield. The draw is 3.30 for the Turf Moor clash while the away side 3.25 to win.