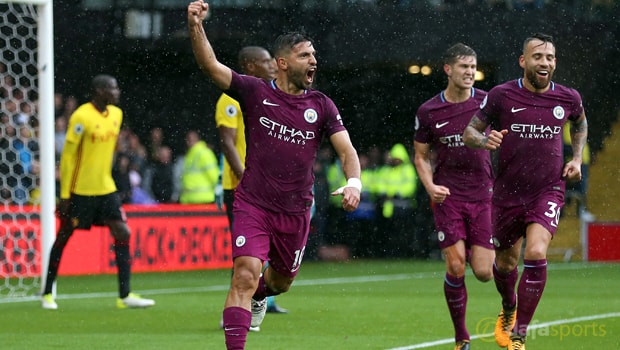 Sergio Aguero seems to have won over Manchester City boss Pep Guardiola after he netted a hat-trick in a 6-0 romp at Watford on Saturday.

The Argentine’s future at City appeared to be in peril around the turn of the year when he lost his place in the team to Brazilian youngster Gabriel Jesus.

Now it seems that Guardiola is content to play them as a partnership and it worked to devastating effect at Vicarage Road.

Aguero scored a brace – heading home Kevin De Bruyne’s corner and before a tap-in from David Silva’s low cross – before setting up Jesus as City cruised to a three-goal lead by the interval.

A tidy finish nine minutes from the end completed Aguero’s hat-trick, his sixth in the Premier League and tenth overall for City – and moved him on to 175 goals for the club, just two shy of Eric Brooks’ all-time record.

Guardiola was impressed with the 29-year-old’s display, and the tight margins he managed to work within when scoring his third goal late on.

“His numbers speak for themselves,” said Guardiola.

“I’m so happy for the third goal because he’s so clever in the box. He’s able to score a goal at any point.”

Nicolas Otamendi and a penalty from Raheem Sterling late on completed the scoring as City took their scoring tally to 15 in three games.

Guardiola feels things are coming together nicely for his new-look side, with summer signings Benjamin Mendy any Kyle Walker at full-back pleasing their manager. “It was so good.

The way we played as a team, we are so happy,” said the City boss.

“I was lucky to manage Barcelona with many outstanding performances but this week has been a lot of goals.

We have found our game, we can make short passes and we have a lot of energy from our full-backs.”

Man City are 2.00 to win the Premier League, while they are 1.17 to beat Crystal Palace at home in their next league outing.