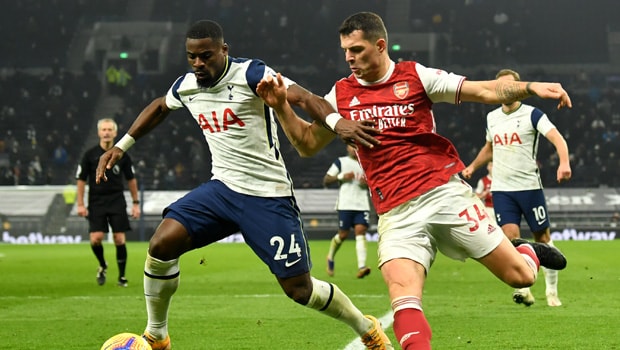 Tottenham Hotspur beat Arsenal 2-0 in the North London Derby on Sunday in the English Premier League.

Spurs had relinquished its lead to Chelsea, who on Saturday beat Leeds United 3-1 to go on top of the log.

The Gunners have been on a poor run of form lately, failing to win in their last four Premier League matches. The last time Mikel Arteta’s men won was in the 1-0 victory against Manchester united.

Harry Kane and Son Heung Min were the deciding factor for Jose Mourinho’s side at the White Hart Lane Stadium.

Both players scored and provided the assist for each other’s goal, and the manager of the side, Jose Mourinho, didn’t hesitate to refer to both players as “world class.”

“Kane clearing balls in the box, Sonny for the first 60 minutes as a winger and then a second striker – it is not just about scoring goals and being world-class players, it is about being great guys and doing your best for the team.” Mourinho said.

The loss puts Arsenal at 11 points away from the top placed Spurs side as they sit in the log’s fifteenth position.

Meanwhile, Liverpool got a resounding 4-0 win against Wolves on Sunday.

Mohammed Salah, Gini Wijnaldum, and Joel Matip all scored for Jurgen Klopp’s side before Nelson Semedo scored an own goal.

Ayoze Perez scored first for the Foxes before Oliver McBurnie’s immediate equalizer in the first half of the 2-1 win.

Jamie Vardy’s winner came in the 90th minute to break the Blades’ hearts who have not won this season.

Crystal Palace thrashed ten-man West Brom 5-1. Wilfred Zaha and Christian Benteke both scored a brace each in the second half after the first half ended 1-1.