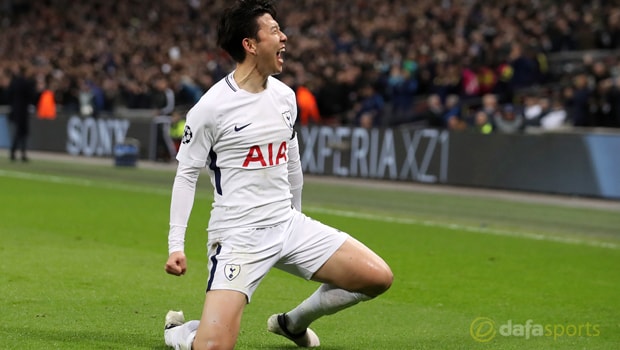 Son Heung-Min has brushed aside any suggestion that a lack of experience was decisive in Spurs’ Champions League exit at the hands of Juventus.

Tottenham were seemingly well on target for the last eight when Son fired then in front against the Serie A champions at Wembley, establishing a 3-2 aggregate lead and leaving Juve needing to score twice to progress.

In a game that Spurs seemed in control of, the visitors scored twice in four second-half minutes through Gonzalo Higuain and Paulo Dybala to leave the Premier League side staring down the barrel.

They couldn’t find a leveller, despite piling fierce pressure on Juventus at the end.

Spurs manager Mauricio Pochettino labelled suggestions that experience cost his team as “rubbish” and it was a view echoed by Son, who said they deserved to go through.

Son said: “No, I don’t think so. Do you think they played better than us? We deserved more. We dominated the game.

They just scored two goals and everyone’s thinking, ‘Yeah, they went through normally’. I don’t feel like that.

“I’m very proud of our performance. We should have scored a lot of goals in the first half. The [situation in the] second half takes experience, of course. You could say that.

“But I think our players are experienced enough. Sometimes if you don’t score, you lose. That’s the main thing.”

The in-form goalscorer did, however, concede that losing to Juventus in the manner they did was a painful blow for everyone at Tottenham to absorb.

“After the game, the dressing room was quieter than normal. But it’s football. It’s about winning and losing,” he added.

Spurs are 1.53 to bounce back with victory at Bournemouth in the Premier League on Sunday, while they are 3.25 to win the FA Cup this season.