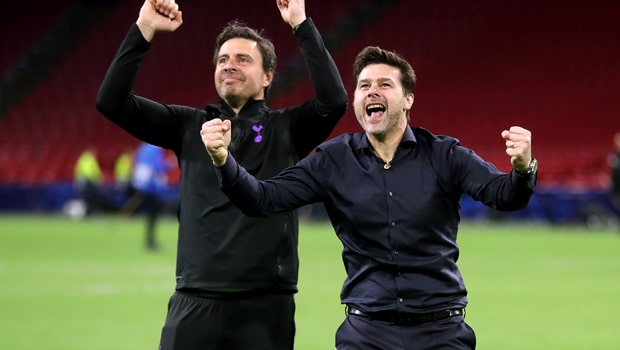 Tottenham Hotspur manager Mauricio Pochettino says his team’s comeback victory against Ajax to send them into the Champions League final was close to a miracle.

Spurs went into their second leg tie at the Johan Cruyff Arena as big underdogs following a disappointing 1-0 defeat at Wembley last week.

Their task looked almost impossible half an hour into the game as goals from Matthijs de Ligt and Hakim Ziyech gave the Dutch outfit what looked like an unassailable 3-0 aggregate advantage.

However, Lucas Moura scored two quickfire goals early in the second half to breathe new life into their European challenge.

After several near misses, including Jan Vertonghen hitting the crossbar, Spurs netted a dramatic injury-time winner as Moura took advantage of tiring Ajax legs to slide home the winner and sent the Tottenham players, staff, and fans into raptures.

Following the conclusion of the game, an emotional Pochettino hailed the evening as one of his best ever. “I think it’s one of the most important nights in my life,” he said.

“To get the club to the final of the Champions League – I think is very close to a miracle.

“No one believed in us from the beginning of the season. We are so close to the top four and have the opportunity in Madrid to play the final against Liverpool.”

The result came just 24 hours after Liverpool achieved a similar feat following their 4-0 demolition of Barcelona at Anfield.

It sets up an all-English final for the first time since 2008 and Liverpool are the current favourites at 1.50, though Spurs can be backed at 2.50 to lift the trophy.