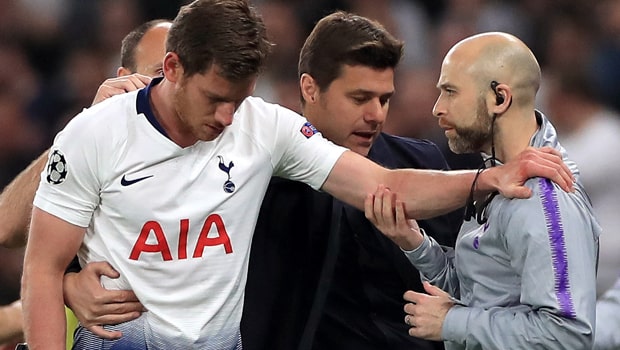 Mauricio Pochettino admits he got his tactics wrong as Tottenham were beaten 1-0 at home by Ajax in the first-leg of their Champions League semi-final tie on Tuesday.

Ajax dominated the opening exchanges at the Tottenham Hotspur Stadium and deservedly took the lead when Donny van de Beek netted what could prove a priceless away goal on 15 minutes.

Pochettino had set his team up in a 5-3-2 formation, but they were getting overrun in midfield on numerous occasions, with the Argentine admitting after the match that he may have got his tactics wrong.

“Watching now of course I can accept it was a mistake the shape we used,” Pochettino told BT Sport.

“But there were not too many options. I am not happy – you cannot guess what happens if we play in a different way. But our lack of energy and [we were] a little sloppy.

“It was the not the shape that conceded the goal. Our approach to the game was not good. I am the manager so I have responsibility.”

Pochettino’s hand was forced midway through the first-half when central defender Jan Vertonghen was forced off with a head injury, with midfielder Moussa Sissoko coming on in his place.

That extra body in midfield certainly appeared to benefit Spurs and Pochettino was quick to praise Sissoko’s influence on the match.

“When Moussa Sissoko was in, he provided good energy and we played better.

“Second half we pushed them deeper and pressed in a way we wanted to press. The second half gives us hope for the second leg.”

Tottenham are priced at 9.00 to go on and win the Champions League this season, while Ajax are available at 3.50 to win Europe’s premier club competition for a fifth time.