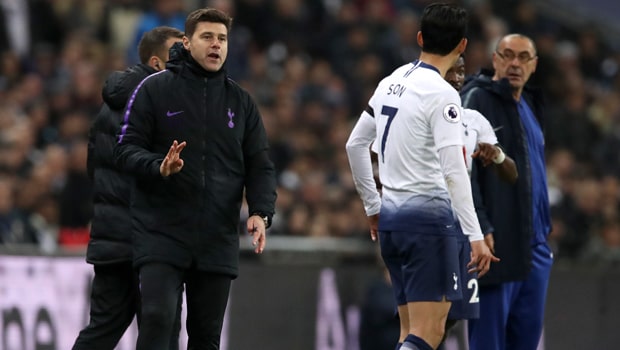 Mauricio Pochettino suggested Tottenham’s football had done all the talking needed after they swept Chelsea aside 3-1 at Wembley.

Pochettino’s men produced a terrific performance to move above their opponents in the table into third, ending the unbeaten start made by Chelsea under manager Maurizio Sarri in the Premier League as they did.

Dele Alli and Harry Kane scored within 16 minutes of the start as Spurs made a blistering beginning, leaving Chelsea trailing in their wake.

The Blues rarely threatened to muster a counter attack and Son Heung-min scored the goal of the game shortly after half-time to cement Spurs’ position of authority.

There was a late strike from Olivier Giroud but it was far from consolation for Chelsea and Pochettino couldn’t hide his delight afterwards.

The one thing the Argentine was focused on however was trying to urge his players to find consistency in reaching high levels of performance as they moved up to third spot, five points behind leaders Manchester City.

“There’s no need for me to talk too much. I am so happy, so pleased,” Pochettino told BBC Sport.

“I don’t need to analyse too much. All credit to the players because they were fantastic.

“The staff are so happy managing this group of players. We need to be humble and recognise that, playing like this, we can do big things.

“Our challenge is to keep going and be consistent.” Goalscorer Son admitted that Tottenham had set out to attack Chelsea early and their plan paid rich dividends.

The South Korean missed a number of goalscoring chances but, after netting his 50th Spurs goal, he vowed to work on his finishing.

“Our performance was very good and we deserved to win,” he said.

“We said it before – the first five minutes are so important. We played direct and scored an early goal. Afterwards, we created a lot of chances. I need to be more clinical.”