Pep Guardiola: City were ‘quite lucky’ in Hammers rout 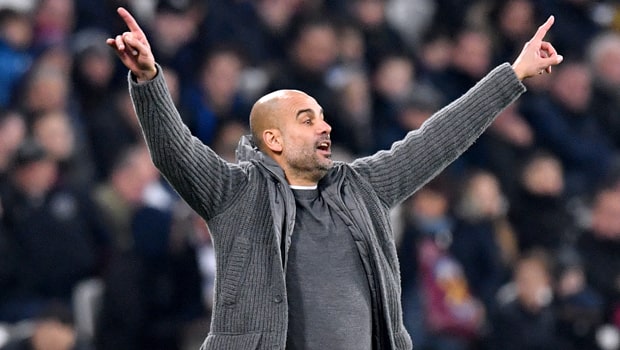 Pep Guardiola watched his Manchester City side thrash West Ham 4-0 at the London Stadium and then declared they had been “quite lucky” and nowhere near their best.

The City boss highlighted the struggles of some of Europe’s biggest clubs in finding their stride on the back of the international break.

Premier League champions and leaders Man City appeared to have had no such worries, leading 3-0 by half-time after goals from David Silva, Raheem Sterling and Leroy Sane.

The German also added the gloss in stoppage time as the Citizens made it 11 wins and two draws so far this season and maintained their two-point advantage over Liverpool in the table. For Guardiola, however, there was clear room for improvement.

“If you see the result, especially after the international break, it is good,” Guardiola told BBC Sport.

“The players train in a different way, so it is difficult to come back.

“West Ham had chances and they didn’t score. We were quite lucky but we will come back to our best.

“We are a humble team and today we weren’t at our best – too many touches, our passing was not good enough but our running was fantastic.”

The Premier League champions have now played four games at West Ham’s new stadium and have scored 17 goals and conceded only once.

City are unbeaten in their past 19 league games since late last season, conceding just eight goals along the way.

Man City are 1.22 to win the Premier League this season, with Liverpool now 4.50 after their 3-0 win at Watford on Saturday.