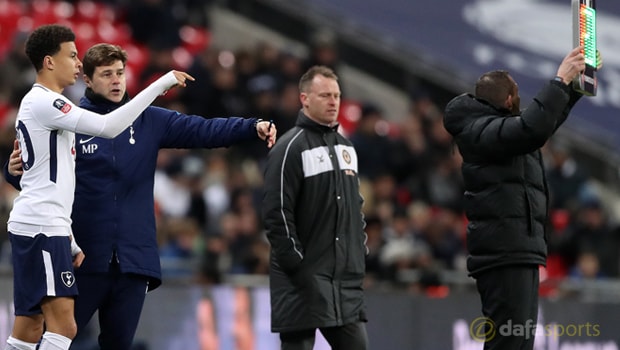 Tottenham coach Mauricio Pochettino was quick to praise his side for their “professional” performance after they beat Newport County in their FA Cup fourth-round replay on Wednesday.

With Arsenal coming up on Saturday in the Premier League, Pochettino made 10 changes to his starting XI from the 2-2 draw with Liverpool.

Harry Kane had rescued a replay in the first leg at Rodney Parade but was on the bench as Erik Lamela produced a man-of-the-match display at Wembley.

An own goal from Newport’s Dan Butler and a strike from Lamela ensured Spurs booked their place in the fifth round where they will take on Rochdale.

When asked about his team’s display, Pochettino told reporters: “We are in the next stage and that is the most important thing.

The performance was professional, it was an important win. “It’s important for many players to have the possibility to play.

It’s tough to find a place to play because the team is doing well. Today was a great opportunity for different players, like Toby (Alderweireld), Danny (Rose) and Harry Winks, to play games and compete at this level. It’s completely different to training.”

The boss also singled out Lamela after he showed glimpses of his best form after a tough 18 months with injury.

“It’s important, it’s a very good feeling for him and he is an important player,” added Pochettino.

“He had a year out and it’s never easy to come back as he was before but he loves football and loves to train and his mentality is fantastic.

He is going to recover his real level and improve because he is more mature and in a tough moment you learn a lot.”

Spurs are the heavy favourites to beat Rochdale and are now priced at 6.00 to go all the way and win the FA Cup this season.